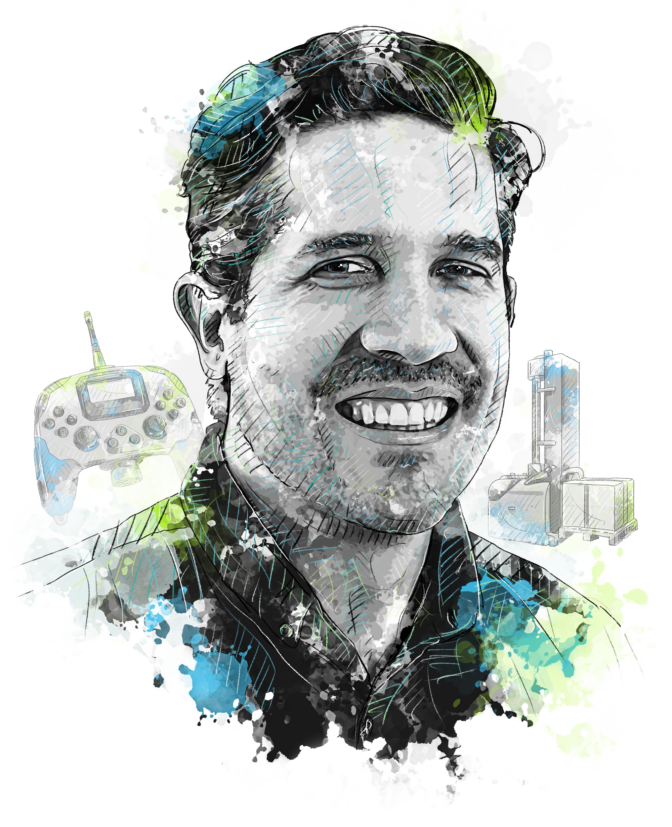 As a kid, Samuel Reeves was no robot nerd. Rather, he dreamed of being an entrepreneur, especially if he could start a business to help save the world. He got his chance when he learned unexploded land mines from long-ago wars were killing people across the developing world. The victims were often heroes trying to remove the mines. “You had people crawling around on their hands and knees, digging them up,” he says.

While still in college, Reeves developed a robot that could detect and disarm land mines without endangering humans. The 10,000-pound autonomous vehicles, created like Transformers from conventional construction equipment, were potentially dangerous themselves, so Reeves and his team had to develop sophisticated safety control systems. “Part of that was a safety-critical wireless network that would let us do the most basic thing, which was to stop it,” he says. “You know, kill it before it kills me.”

Thus was born his first firm, Humanistic Robotics. Then, as large-equipment manufacturers, like Caterpillar and John Deere, moved into the robotics space these companies became more and more interested in incorporating safety systems. In 2018, Reeves spun out FORT Robotics, which makes software and hardware to secure robots in such industries as warehousing, manufacturing, agriculture, mining, transportation and even lawn care.

FORT’s unique suite of high-tech safety and security tools are a gamechanger for the industry, Reeves says. “Nobody has created a way to do functionally safe machine control over any network,” he says. “We can do this.”

Since its founding, FORT has raised $41.5 million in venture capital funding. Customers include Boston Dynamics, the robot manufacturer spun from MIT, and Toyota Material Handling, the largest forklift maker in the world. FORT offers a combination of software and hardware that provides both functional safety—preventing robots from running amok—and cybersecurity to guard against potentially disastrous hacks.

“The cocktail of technology that has to go into a mobile autonomous robot is just ridiculous,” says Reeves. “You have the machine electronics themselves, plus massive storage and computing, sensing and AI, and everything is on the cloud. That’s a huge attack surface. Name your doomsday scenario—from concrete getting mixed the wrong way for a bridge to water treatment plants getting spoiled.”

Reeves might have come by his robotics obsession late in life compared to kids with rooms full of Transformers, but he has more than made up time with a unique twist on the march of automation. Plus, his 7-year-old son is already a true robot fanatic. “Dad’s office is his favorite place to go,” Reeves says.