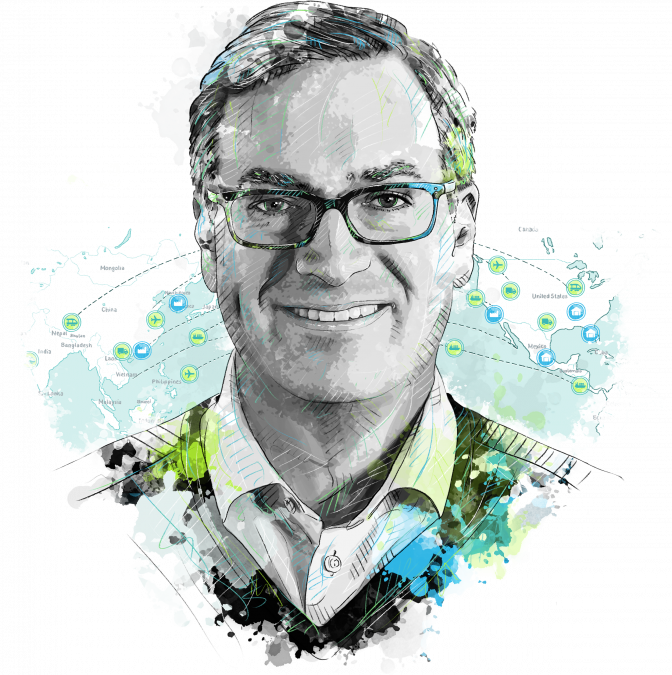 Dave Clark has made a name for himself getting goods from point A to point B around the globe. Now, as the new co-CEO at Flexport, he helps shipping companies and manufacturers do more than simply move freight efficiently and on time; he uses technology to help small, medium and large businesses operate more sustainably.

“Most companies aren’t able to invest in the technology they need to run the kind of global supply chain that large enterprises can,” Clark says. Simply put, Flexport’s platform matches the people who move goods around the world with the people who need goods, no matter the size of their companies. “It’s like a supply chain for everybody else. We unlock capacity for entrepreneurs and help the environment in the process,” Clark says.

Before joining Flexport, Clark worked at Amazon for 23 years, holding a variety of senior leadership positions before becoming CEO of its Worldwide Consumer division. A self-described “supply chain geek,” he is credited with helping make Amazon a supply chain powerhouse.

Seeking a new challenge, Clark became Flexport’s co-CEO in September, alongside Ryan Petersen, who founded the company in 2013 and has called Clark a “legend in the supply chain world.” Clark will become the company’s sole CEO next March, with Petersen moving into an executive chairman role.

At Flexport, Clark says his job is clear: “Enabling globalization for enterprises—both large and small—to get their goods from wherever they’re manufactured to the customer.” And, despite recent supply chain challenges, he predicts our interconnected global economy will continue to grow. “There’s a sense of fear from what has been a lack of availability,” says Clark. “But memories are typically very short, and things will go back to what is the lowest cost, highest quality, fastest path for delivery. I think globalization is going to be a part of that for the foreseeable future.”

As ships and containers run partially full, that’s incredibly bad for the environment—wasting fuel to transport air instead of product. That’s a place where technology can take energy out of the system.

Flexport’s software integrates information from ocean carriers, trucking companies, airlines, warehouses, customs brokers and others in the fragmented cargo transportation network. The company then makes this information available to importers, exporters, and other customers so that they can track and manage shipments easily. The goal: no more emails and phone calls asking, “Where’s my stuff?”

Clark is also committed to creating visibility tools that allow businesses to reduce greenhouse gas emissions through container maximization. He observes, “As ships and containers run partially full, that’s incredibly bad for the environment—wasting fuel to transport air instead of product. That’s a place where technology can take energy out of the system.”

Even as the global economy hits speedbumps, Clark is committed to growing Flexport. He views the difficult economic picture as “an opportunity to build the products that customers are going to need as we come out of this.” Clark’s plans include doubling the company’s engineering team in the coming year, continuing to invest heavily in technology, and building more business partnerships.